Research Briefing: The associative structure of memory for multi-element events


Inspired by Chris Chambers and Mark Stokes, this is a research briefing about a recent paper published by myself and Neil Burgess. My hope is that it explains why we did the research, what we found, and why we feel this is important. As with the research briefings from the names above, it is aimed at a scientifically-curious individual without any prior knowledge in the subject. In relation to this, I hope I pitch it correctly – do let me know one way or the other!

When we remember previous events in our lives we bring to mind a wealth of information. We remember the layout of the living-room, the person we were talking to, the music that was playing in the background and the smell that wafted through from the kitchen. When we first experienced this event, each element within this multi-sensory experience was processed in different regions of the brain. For example, the visual information will have been processed in visual cortex in the occipital and temporal lobes and the auditory information in auditory cortex in the temporal lobes. How is it that we are able to remember all these multiple elements despite them being processed in different regions of the brain?

Theories of episodic memory (memory for events) suggest that all the multiple elements of an event are bound together in an ‘event’ memory (or, more precisely, and event ‘engram’ or event ‘memory trace’) [1]. By binding all this information into a single engram, all the elements from an event can be retrieved and re-experienced at a later time. The hippocampi, located in the temporal lobes, are thought to support this binding as they receive input from multiple regions of the cortex. In this sense, they act as ‘convergence zones’, binding information across our multiple senses [2].

Although most theories of episodic memory presume the existence of bound event engrams, little evidence has been presented in support of this idea [though see 3]. One prediction that stems from this proposal is that the retrieval of elements from the same event should be related. If you retrieve information about the location you were in, you should be more likely to retrieve information about who was there and what they were saying at the time. In other words, retrieval of an event should be ‘all-or-none’ in nature. We tested this prediction, providing support for the existence of bound event engrams. 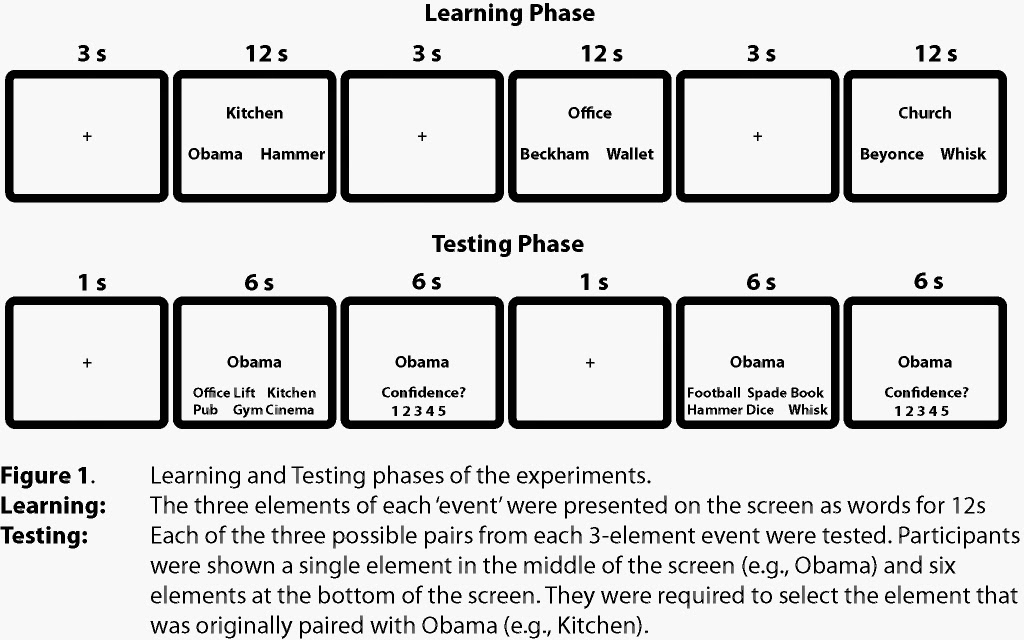 The experiments consisted of a learning and a testing phase (Figure 1). During learning, participants were presented with a series of ‘events’. Each event consisted of three elements – a location, famous person and object. For example, an event might be: Kitchen, Barack Obama and Hammer. The three elements of each event were presented on a computer screen, as words. Participants were required to construct a mental image of the three elements interacting and imagine it as vividly as possible. For example, they might imagine Barack Obama smashing kitchen cupboards with a hammer. After learning several events we tested their memory for each pairwise association within each three element event. In the above example, this meant testing the association between Kitchen and Barack Obama; Kitchen and Hammer; and Barack Obama and Hammer. 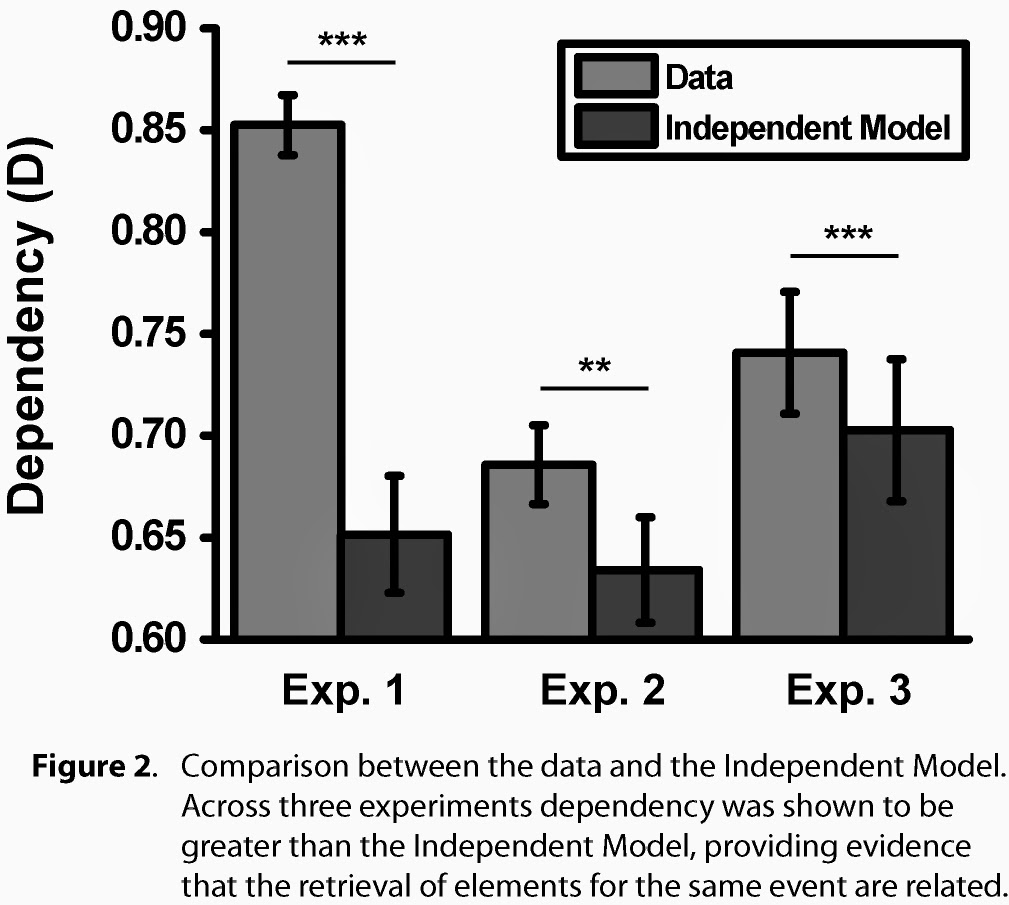 If all three elements of an event are bound in a single event engram, performance for each pair should be related. If you remember Kitchen and Barack Obama, you should also remember Kitchen and Hammer. Equally, if you don’t remember one pair, you shouldn’t remember the other pairs from the same event. We tested this ‘dependency’ between retrievals from the same event. In order to control for differences in accuracy and the level of guessing across participants, we developed models that predicted the level of dependency if performance of pairs for an event were unrelated (the Independent Model) or if performance of pairs for an event were completely related (the Dependent Model). We then compared the amount of dependency for each participant with each of these models to see if the retrieval of elements from the same event were related. Across three experiments we showed strong evidence for this predicted dependency. The level of dependency was consistently greater than the Independent Model (Figure 2), and in some situations did not differ from the Dependent Model (see paper).

Thus, we provided evidence that the multiple elements of an event are bound within a single ‘event’ engram. Event engrams are thought to be the fundamental building blocks of episodic memory. They allow us to retrieve information about a single event, without retrieving information from other similar events. Despite the common assumption that these event engrams exist, we provide some of the first behavioural evidence for their existence. Our future work is focussing on revealing the exact neural mechanism that allows for this event binding, as well as investigating which regions of the brain support this binding process.