When we recall events like these from our past we are able to re-immerse ourselves in the experience, as if we were there once again. You might remember being in your dining room, eating birthday cake, whilst your friends sing happy birthday. You might even remember incidental details, like what you were thinking at the time or the music playing in the background. How do we remember and re-experience these complex events?

A long-standing theory, originally proposed by Marr but developed by many others, suggests that the individual elements of a complex event are represented in distinct neocortical regions. For example, the faces of our friends might be represented in visual regions in the ventral temporal lobe whilst the background music might be represented in auditory regions in the lateral temporal lobe. These distinct elements are thought to be bound in a single coherent memory – what Tulving referred to as an ‘event engram’. It is the hippocampus, receiving input from multiple neocortical regions (acting as a ‘convergence zone’ in the words of Damasio), that is thought to form these event engrams when we first experience an event.

What happens when remembering this event at a later date? Perhaps you meet a friend who attended your birthday party. This friend acts as a ‘cue’ to retrieve the previous event. Importantly, with a single cue we are able to retrieve the entire event. In this case, we see our friend and that enables us to remember the room we were in, our birthday cake, the background music etc. This retrieval of a complete memory from a partial cue is known as ‘pattern completion’ and is thought to be a key function of the hippocampus (and particularly subfield CA3 of the hippocampus). Following this pattern completion process in the hippocampus, all the retrieved elements are thought to be ‘reinstated’ in the neocortex. In other words, the same representations that were active when we first experienced an event become active at retrieval. It is this hippocampal pattern completion process, followed by reinstatement of all event elements in the neocortex, that is thought to underpin ‘recollection’ – our ability to subjectively re-experience a previous life event.

Despite a wealth of evidence for the involvement of the human hippocampus in episodic memory, and recollection in particular, evidence has not been presented for this pattern completion process in relation to the retrieval of complex events.

Participants learnt pairwise associations of locations (e.g., kitchen), famous people (e.g., Barack Obama), objects (e.g., hammer) or animals (e.g., dog). Importantly, each pairwise association overlapped with other associations, forming complex ‘associative structures’ (see Figure 1). For example, you might learn ‘Kitchen-Obama’ on one trial, ‘Obama-hammer’ on a second trial and ‘hammer-kitchen’ on a third trial. As such, we build relationships between multiple elements across separate encoding trials. This is an example of a ‘closed-loop’ structure, where each element is paired with each other element (forming a triangle of associations). This closed-loop condition is compared to ‘open-loop’ structures, where a chain of three associations is formed between four elements (see Figure 1). Importantly, both conditions are formed from three pairwise associations across three encoding trials. Participants are asked to vividly imagine the two elements for each association ‘interacting in a meaningful way’.

At retrieval we tested each pairwise association. For example, we cued with ‘Obama’ and participants were required to retrieve ‘kitchen’. They were shown six elements of the same type (locations in this example) and asked to select the element (kitchen) originally paired with the cue (Obama). The retrieval trials were identical for both the closed-loop and open-loop condition.

How does this allow us to look for pattern completion? If pattern completion is present then when retrieving a single element, all other elements should also be retrieved. In our example, when cued with ‘Obama’ and retrieving ‘kitchen’ the object associated with these two elements (‘hammer’) should also be retrieved. This is despite ‘hammer’ being task-irrelevant during this trial. 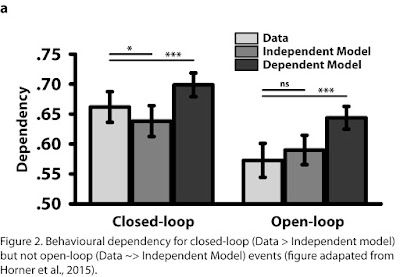 This retrieval should have behavioural consequences – retrieval accuracy for any two elements within an event should be related (called ‘behavioural dependency’). If you successfully retrieve ‘kitchen’ when cued with ‘Obama’, you should be more likely to retrieve ‘hammer’ when cued with ‘Obama’. This is because your retrieval success for one element is based on the strengths of all the associations for a single event. We provide evidence for this ‘behavioural dependency’ in our closed-loop, but not open-loop, condition (see Figure 2). This suggests, despite their similarity at both encoding and retrieval, that pattern completion is present in the closed-loop but not the open-loop condition. 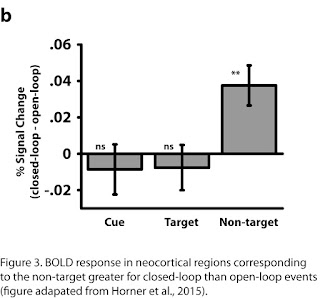 If pattern completion is present in the closed-loop condition we should see reinstatement of all elements in the neocortex – including the ‘non-target’ element. Using fMRI, we identified neocortical regions associated with the encoding/retrieval of individual elements. Locations were associated with the parahippocampal gyrus, famous people with the medial prefrontal cortex and objects/animals with lateral occipital cortex. We next looked for ‘reinstatement’ of non-target elements. If cuing with a location, and retrieving a person, we should also see reinstatement in the region associated with objects/animals. We found greater activity in non-target regions for closed-loops relative to open-loops, again consistent with pattern completion in the closed-loop but not open-loop condition (see Figure 3). Importantly, we also show this ‘behavioural dependency’ and retrieval of non-target element in a computational model of the hippocampus (an attractor network model), further demonstrating the presence of pattern completion in the closed-loop but not the open-loop condition. 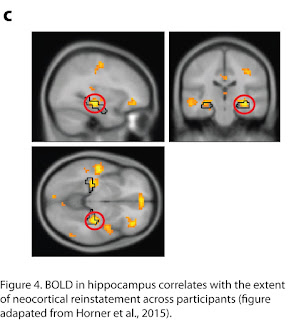 To summarise, we have presented behavioural, computational modelling and fMRI evidence for hippocampal pattern completion and neocortical reinstatement in humans, and related these processes to the retrieval of complex events. We believe this is the first evidence to support a long-standing mechanistic account of recollection – our ability to subjectively re-experience previous life events.
Posted by Aidan Horner at 05:11